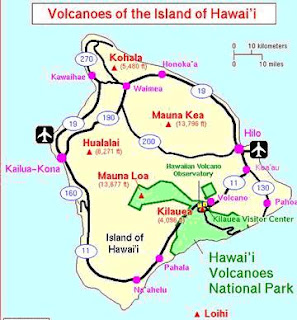 The name ‘big island’ is given to this island as this island is big in size. It is also called . This Island has two airports one in (east side) and the other in Kona (west side). The driving distance between these two places is approximately 2 hrs. The northbound road is more scenic. 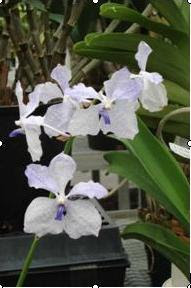 We started our tour from side of big island which is windward side i.e. it is the wet side. This side has less sun. You can see rainforests, botanical gardens, and waterfalls on this side. Guides of the bus are very knowledgeable. They tell you names of the plants, history etc. On the way we stopped at Orchid gardens. This was full of beautiful orchids. We could only hear camera sounds and flashlights for the next ten minutes. We saw a picture of the most expensive orchid. (It was not that beautiful but it was perfect in design – worth $20000).
All ladies got flowers. Hawaiians say if a lady has a flower on the left side, she is taken. If it is on right side, she is looking and if someone wears it in the middle, she is confused. We had 2-3 confused souls on the bus. 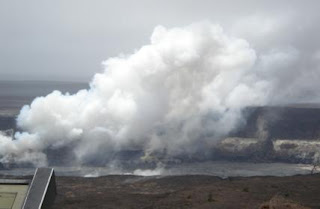 Next stop was Volcano national Park. It was cloudy, raining and pretty cold. This is a typical wet weather. We visited visitor’s center, which is not big, but has good pictures and information. Rangers were ready to answer your questions. We saw some kind of a vapor coming from the ground. It was just water vapor….nothing to worry. Water goes down and when it comes in contact with hot lava it comes out as vapor. This gives you the idea that you are driving on live volcano. I think this is something to worry about. There is an 11 mile route around the crater (hule), which you can drive on. We could not go near the crater as that day sulfur levels were too high. This is hazardous for life, so we saw smoke /fumes coming out of crater from the distance. It was awesome. You could see an orange glow at the bottom. We took many pictures. 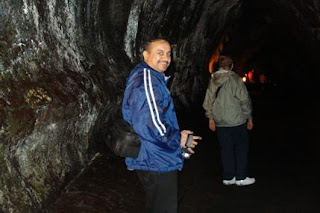 Then we visited Thurston Lava tube. This lava tube was found by Thurston on accident. There are many lava tubes under ground. You get an idea how the lava flows to the ocean through these tubes. A small part of this tube, which is lighted, is open for public. Next part is 40 miles in the dark. When the lava flows on the ground, it starts cooling (in 20 minutes or so). So, it hardens on the top and there is hot lava inside which keeps moving. This phenomenon makes lava tubes. So, when you walk on new lava, you have to be always careful. You can see red under your feet.
Lava meeting sea……
When we visited , we booked our trip in advance. I used to visit http://nps.gov/HI site. It gives you all the updates about lava flow. 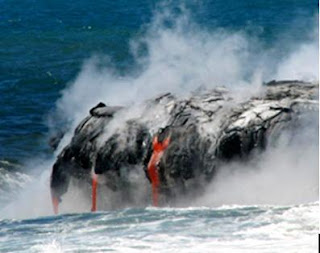 Volcano national park has a continuously erupting volcano, . By chance, lava stopped flowing for 3 months. I was a bit upset, but we were lucky enough since it started flowing just 2 days before we started our trip. There was another eruption when we left . This flow is continuous. When I saw all this I started thinking about the pumping system of lava from the magma (it is some 60 miles deep), and the tremendous energy inside. It keeps on pouring into the sea and makes new land, which you can actually see. First you see clouds of steam and at the base you can see lava pouring into the sea. (I will not go into details and numbers. They are easily available on the net). This view is the best in the dark. We took an airplane trip from another island to see the lava entering the sea as they were changing timings and site everyday. High sulfur emission was another reason. Bird’s eye view is the best.

We saw old lava flows which had destroyed the land. This land was blackish dark due to burning and tremendous heat. There were dead trees and we could see destruction on one side of the island. On the other hand, there was a land in making at the sea shore in front of us. It was amazing. You can see destruction and construction at the same place. This is Mother Nature. We cannot disturb it or master it. We can just watch. We generally learn all these things about lava in the school books and watch it on TV, but watching it in front of you was really breathtaking…kind of scary. Credit goes to American tourism which takes you so close to the lava. People staying in this area are really cool. I think they take lava warnings as we take flood warnings. We saw one subdivision road crossed by lava (royal garden subdivision). They stay so close to the lava, can you? 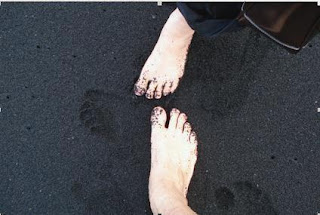 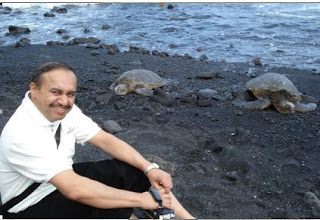 Generally you see some turtles relaxing on the sand. You are not supposed to touch these species as they are endangered.
Our second tour on big Island was , another volcano which is dormant. We took Arnotts lodge tour from . We stayed in Kona, so we had to drive 2 hrs to take this tour. If you want to see the volcano and Mauna Kea stay in . Generally good hotels and sunny weather is on Kona side so tour people book hotels in Kona. We drove northbound and this route was scenic. 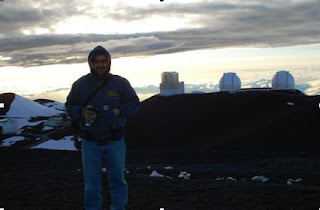 Mauna Kea () got this name as there is always snow on the top. This mountain is approx 14000 ft high. It is supposed to be the tallest mountain in the world if measured from the bottom of the sea. You can see cinder cones. It is the best place for astronomers. Eleven nation’s astronomers work here using different technologies. Actually they work from the base. This is a remote place. We are above the clouds so you get clear skies most of the times. Winter months have wild weather sometimes, so check before you plan. This is the place where you climb 14000 ft in about 2hrs. Our tour started at Arnotts lodge – . Tour guide gave us a tour of downtown. Then we took saddle road to go up. This road is uneven and bumpy. You can see lava on both the sides. At 9000 ft, we can stop at visitor center. 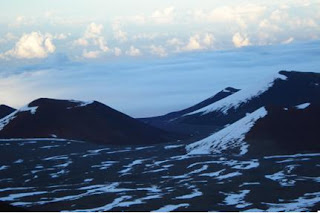 Our tour guide asked us to drink lots of water and get down in between. He took several stops and that helped us to acclimatize to the high altitude. He made us climb a small hill before we reached visitor center. We could see from there. This is a dormant volcano. There was almost no vegetation on the top. You get beautiful sunset views. We took many pictures of the sunset. There are many telescopes on the top. Caltech has its telescope here. KECK is the biggest. Visitor center sets the telescopes for observation. You can stop and get some good views of star clusters, nebula etc. We were expecting our guide to set a telescope and do some stargazing as told before, but he just showed us stars by naked eyes. He explained how old settlers took help of stars for direction. We knew most of the things – thanks to Varun. Do not choose your trip near full moon day.
It seems on clear day (this is very rare) standing here you can see blue water around you, and other island in front of you. What a situation! You are in the middle of the ocean (there is only water 2000 miles around you), standing 14000 ft high and watching other island…..
We met one girl from ..Mayomi (I hope I am right..) She came all alone to for hiking. She was well traveled. She was working on a film project on Indian story. We had nice chat while coming back. She was working for a company in Swiss for some American company and the work was outsourced by .. She asked very good questions about Indian culture. One good observation was about ‘Bollywood movies. They show so much skin on the screen, then why there was so much hype about Shilpa shetty and Richard ?

There is another interesting volcano on big island. is the largest volcano on the planet. Generally mountains have ups and downs but rises gradually. You don’t see any peaks or ups and downs in between. That’s what makes (big mountain) different from other mountains. We saw it while climbing up . is one of the most active volcanoes on the earth. Last eruption was in 1984. Scientists keep a watch on the smallest activity of this volcano. This volcano is a shield type volcano and spreads more than 100 miles. It is very big (refer to the map in the beginning).
There is a green sand beach which is not easy to reach. We could not visit it due to the time crunch. This green color comes from olivine crystals. White sand comes mostly from shells. 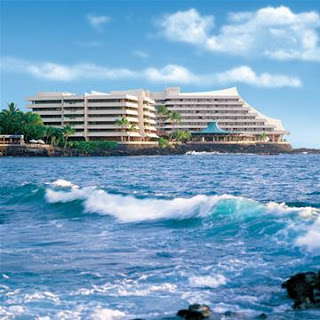 We stayed in Kona side of the in Royal Kona Resort. This hotel has a nice location. In general, big island has fewer beaches. This hotel has a program with Manta rays. The place was near Alii road. You can see cruise ships in the water in the morning. Water color is a beautiful blue. As we were celebrating our anniversary, we were upgraded to a sea view room and they gave us complementary champagne.
We were happy as we were upgraded, but this sea was rough so I could not sleep properly. Next day I was ok.
We got a chance to visit farmers market. It was full of handy crafts and fruits and flowers. We saw apple banana, strawberry banana and some unknown fruits. I did some shopping here. 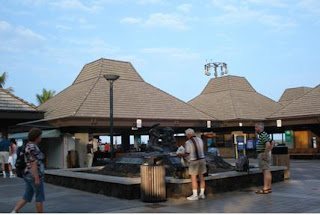 Next morning we took a flight from Kona airport. We saw lava on the airport road (black rock pieces.) does not look like airport; it looks like huts or some rest area.

Big has many climates. You get to see rainforest, waterfalls, sunny weather, snow and dry land on one single
Posted by Madhuri at 2:16 PM 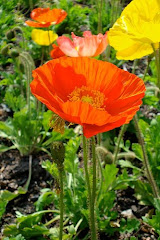